It’s been almost three weeks without shooting for me since Ramadhan started. This photo was taken before fasting month, I miss to be out there again, but Aidilfitri is approaching so I’ll postponed the shooting afterward. My Raya mood is on now. 😀

About the technical spec, this is a Digital Blending work consist of two exposures ; one for the upper & one for the lower part. Both exposure were manually blended in Photoshop and then I do basic adjustments like increasing saturation, adjusting levels/curves/brightness – I do the adjustment with masking technique. Then I sharpened it few times at certain part and after that I reduce some noise. Oh, I also do the lens correction in LR3 and that’s about it!

Weekend has almost come to the end now, so I wish everyone Happy Monday Blues for tomorrow! 😀 Hey guys! Another picture from Jeram, but this time no more jumping waves because the tide is decreasing as the nightfall. According to the exif data, this shot was taken at 20.05. Isn’t it awesome, the light is still amazing at that time!

The title Skel og Rokk is from Icelandic word which means Shell and Rock. Actually I was dreaming about Iceland when posting this picture, so I decide to give it a title in Icelandic.

Back to the shot, I used a slow shutter speed to catch some of the wave motion passing through both the rock and the shell. But the waves just passing through the rock. Nevertheless, I think it still look cool.

I guess Jeram series have come to the end for now. Hope everyone enjoy the series! :)) Hey guys! Here’s my closest encounter with Jeram spray on that day taken on different angle. Yes, I do got wet a little by this waves. Luckily my so-not-weather-seal lens was covered by 4×6 nd grad filter. I guess nd grad not just for balancing the sky, also it can protect your lens from salt spray! 😛

As for this shot, I use the same technique like the previous post, which is Digital Blending. Two exposures shot, one for the sky and one for the waves. Both were manually blended in Photoshop.

Hope you guys enjoy the picture! 🙂 Hey guys, this is my third picture from recent Jeram visit. Like I said in previous post, the tide was high and the waves are just crazy. So here’s the proof, the waves jumping right in front on me. Luckily, not hitting my camera. But me, already wet! 😛

Sometimes it is necessary to get wet, to get a good shot. 🙂 Hey guys, this is my second picture from recent visit of Jeram. I tried to capture the waves motion and lines here, which I think is quite interesting because it was swirling little bit. For this shot I used two exposures, one for the sky and one for the waves. Both exposures were then manually blended in Photoshop. This is not an HDR image. Wonders of Jeram, MY

Another old stock photo from my last outing with Sang Photographer and Shazral at Jeram. Well, this is my first time visiting Jeram. A simple and nice outing with Sang Photographer and Shazral. Alhamdulillah, we are so fortunate because the weather turns out nicely.. 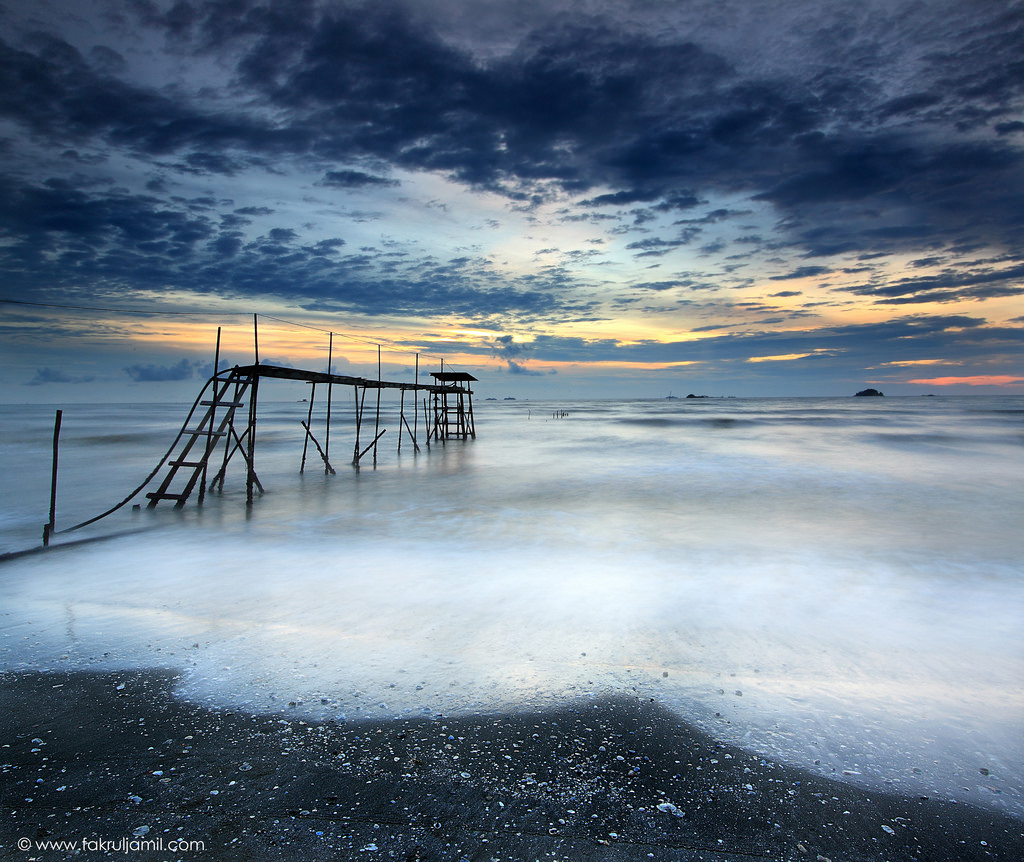 Tech spec: My first try of vertorama, consist of 2 exposure, one for the upper part (2.5s at f/22) and the other one for the lower part (5s at f/22). Both exposure were manually blended in Photoshop CS3. After that, I do some minor adjustments and little touch-up like increasing levels and saturation, dodging and burning, and few sharpenings.

P/s: Thanks to SP for inviting me to tag along and thanks to bro Shazral for giving a ride.